Meatopia: Periodic gathering of carnivorous foodies and trendies to have a massive BBQ manned by the current favourite chefs on the scene.

Born in concept across the pond, Meatopia made it’s UK début at Tobacco Dock in Wapping last year to the simple promise of high quality, ethically sourced meat cooked on an open flame. They encourage consumption from ‘toe to tail’ and give a showcase opportunity for some of the best eating around plus craft beers, booze and tid bits in their tasting room as well as subtle but consistent plugs throughout the day for various sponsors- 2014 including Sailor Jerry’s and our heroes at Maldon Sea Salt. The sequel happened over 6th & 7th September this year and I made it along with the boy, the other boy and his missus for Old Skool Saturday and a fantastic time was had by all.

Make no mistake, there is a LOT of meat, prepped up into handy street food sized portions to be lined up for and taken in exchange for your Meat Buck (a bit like disney dollars, buy online in advance for a miniscule discount). You can then ram the whole delicious bundle into your face before running to the next stop or, if you have need to be all hoity toity and civilised you can take a nice, gentle stroll and nosh away whilst contemplating your next move to the varied soundtrack and constant smellalong of burning wood and sizzling meaty goodness.

Perhaps pause to enjoy a brass band covering Rick Astley and Dolly Parton or a hammy cock-er-ney piano sing along in the main bar while you savour a rum heavy cocktail- I still need to know exactly who was dishing out the bloody mary looking thing with a crispy bacon rasher along side the celery stick. If you need a harder beverage head below to Dickies where you can have shots of bourbon or upgrade to the modern miracle that is the Pickleback (as previously discovered here). Then onwards and upwards to taste small batch craft beers and ciders and wines (oh my) in the tasting room or out onto the decks to enjoy some belting tunes from the DJ Ship and a little breathing space for your belly.

Yes, there is plenty of entertainment and places to sit down and t-shirts to buy and even a nice little indie coffee stand but let’s get to the meat. If only we could have made it to all of the meat! For there were some 20 odd options with sliders, chilli and bacon pretty high on the recurrent themes plus the pretty amazing sight of a whole Ox on the spitroast but sadly only for the cooking and not for the eating on the day of my visit. The decision of what to go for was a struggle to start and something akin to Sophie’s Choice come the end of the day and the final meat buck. The one thing I was sold on before arrival was the Double Smoked Cheddar Dog from the lovely folks at Shake Shack. Due to our early arrival the crowds were low and this was my first stop. Whilst the queues were common and in some cases comically long (I’m talking to you, Beau Myers) the less busy stands certainly weren’t offering any less yummies and in most cases the masters of flame were amicable and happy to have a little chat whilst dishing up your morsels and this was certainly the case here.  Despite the abundance of queues the whole day really is very, very American what with all the bourbon and baseball caps and just being so bloody friendly to everyone despite sweating and slaving away over an open flame. It was a welcome change for this Brit though and great to have a chance to speak to some folks behind the new buzz names that I’d only heard of and mentally salivated over, and don’t anticipate seeing again regularly due to living outside of the M25. Maybe don’t ask them how they came to be on the bill though, because they don’t seem to like discussing the terms or invitation of an appearance here. The first rule of Meat Club perhaps.

We’re going to get photo heavy now and check out the good stuff. 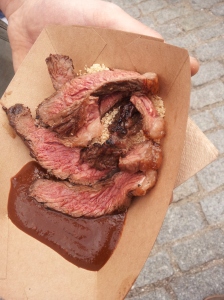 A brief breach in the meat to draw your attention to Crate brewery who were present in the tasting room and at the bar offering their blond, dark and cider bottles. My compatriots attest to the quality of the beers and I certainly recommend the cider. My Kerrie In Law can be quoted with ‘it smells like it should taste of appletise’, which is indeed the case- very dry, very apply and very easy to disappear in record time.  A little investigation shows up crate to be a great looking establishment in Hackney who do retail, wholesale and OH MY GOD THEY MAKE PIZZA TOO! Check them out at http://www.cratebrewery.com 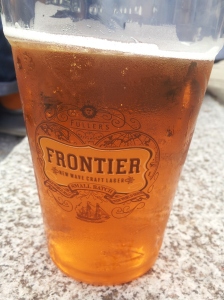 e day and Vegetarian option was the wonderful Frontier Lager, an English beer from Fullers that I’ve not come across before. Great flavoursome stuff, not too fizzy and the perfect wash down for all that lovely meat, best enjoyed out on the terrace to the accompaniment of 70s DJ sounds and a bit of hazy sunshine. I must also make honourable photo free mentions to Korean pork belly from Judy Joo of Jin Joo which both boys devoured to lots of happy eaty noises and Hobo Coffee from Horsham for dishing out some fine hot drinks, maybe next year I’ll have room for an espresso martini. Not even the desserts were suitable for vegetarians and you can look up Mallowists if you like a big wobbly gourmet marshmallow once in a while- I vouch for the strawberry and basil.

So that was Meatopia, a fantastic and original event which stands out from so many other food festivals and flies the flag for just doing one thing, and doing it very well. Edible aspects aside the enjoyability of this day out also owes large amounts to an airy, well run venue which hasn’t sunk to the temptation to oversell, giving a fun and atmospherically busy experience rather than ramming in as many punters as possible to the inevitable overcrowding and ill tempers. No cross words, no impossible toilet queues, no shoving or grumps of any sort so maybe here I should also say a big thank you to those other attendees for contributing to a great day that we are all still talking about. But not too loudly because it still feels like a nicely kept secret and we don’t want any old riff raff turning up next time.

For more info on attending next year you can check out http://www.meatopia.co.uk or do the twitter thing with @meatopiaUK.