Most people remember their first proper couples holiday pretty fondly. Some return there every summer, anniversaries, honeymoons, the lot just to relive those heady sunscreen-scented days of early romance and short haul flights. Let’s be honest it’s hard not to have The Feelings when you’re off work and away from the inlaws in a climate that makes ice cream for breakfast and day drinking fizzy pink wine acceptable.

My first such journey with the Mr was to a self-awarded three star establishment in lully Lanzarote. It was an all inclusive, not-too-far-from-the-beach family friendly  establishment and it cost us less than eight hundred quid including flights, which should tell you just how high the quality of those all inclusive food and drinks were. That’s in total, by the way, not per head. So, it wasn’t the Ritz, but they had a pool and self serve Estrella so it was enough for this budget-challenged girl at the time.  I can’t see either of us putting a return trip high on the agenda but we have fond memories of that little Spanish escape let me tell you, and one of the things we talk about most was the funny little buffet line up every day. Wafer thin bacon and overdone eggs for breakfast. Endless chips and hotdogs. Mysteriously gelatinous Dessert Cakes and my personal favourite, The Lunch Salad- which came out every day with the hot dogs and chips and was basically whatever veg had been out the night before with some extra lettuce and a crapton of mayo. If there were spuds in it, it was Russian salad. When there was a load of tinned pineapple on the go, it was a Hawaiian salad. You get the idea. This might sound a bit skanky to you, but if it does you’re the kind of Brit who gets on my nerves a bit on holiday by moaning about the lack of Dom Perignon and truffled mac n cheese on an 18-euros-a-day all-in menu. Oddly enough, Linda, this hotel off the African coast doesn’t stock up on sliced white from the big Sainsbury’s in Croydon so no, this isn’t like the bread at home either. I hate people. But I like eating, and as neither of us are fussy by nature the Mr and I got stuck into all the local delights on offer and by the end of the week were looking forwards to our Random-Nationality Salad and chips at lunchtime. It hit the spot, and was a mild stroke of waste-avoiding genius for whoever had to create three meals a day for a bunch of sunburned Brits Abroad that were paying next to nothing for it. We could all learn a lesson or two from the head of that kitchen, I reckon. And it seems like I did, because when I was faced with making dinner last night after a long hot day of people being dicks in the workplace, I didn’t have it in me to do much other than cut up everything in the fridge and chuck a load of (sort of) Russian dressing over the top. It was a pretty good dinner for me, and a winner for the Mr who declared after cleaning his plate that it was ‘Really good, bit like a Lanzarote lunch.’. I’m about to finish it up for my own North Essex lunch now actually which has prompted me to share it because, much like those chefs on the Costa Teguise, I have managed to bodge up a winner of a salad with very little care or attention and that deserves a bit of a celebration. It’s pretty substantial as salads go and will hold up as a meal in itself but also great as a BBQ side. 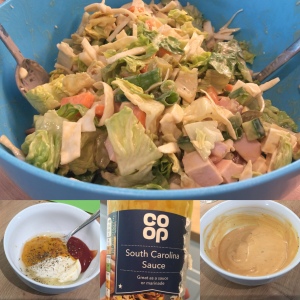 Start by washing your veg, shred the cabbage and lettuce and either grate or roughly chop the carrots. Cut the cucumber, gherkins and springonions quite finely and cube the turkey/ham and cheese to bitesized chunks. I used a cheap Austrian-smoked-style cheese (in the sausage shape, you know the one) but cheddar, cheshire or even a brie type cheese would also work.

Mix it all up and then chill until needed. When the time comes blitz the dressing ingredients together then dress and serve immediately.

Variations- literally millions. You can add any cooked veg to this- broad beans and sweetcorn would be good as would cooked carrots or spuds as long as they haven’t been cooked to mushy hell of course. Chuck in some boiled eggs if you are vegetarian instead of the turkey. The South Carolina sauce isn’t available to everywhere but does make for perfecting this dressing but if you must sub it, use a yellow American style mustard with a pinch of chilli or horseradish for a bit of heat.