I read a weird statistic the other day that more chicken wings are eaten on Superbowl Sunday than there are grains of salt in a really big bag of doritos, or something. Somewhere in the billions anyway. That’s a lot of chicken wings, football fans.

I am not a football fan, but I could eat chicken wings for two meals a day for some time before I got sick of them. If I ever did. Perhaps this is the long awaited answer to my vegan experiment……….

Anyway I don’t like the so called ‘football’ of the Americas, but I really like chicken wings and have been perfecting this marinade for some months now. When the Older Male Sibling said he wanted them to appear at his next BBQ, I knew they were good enough to share with you people. Knock some up for the next Six Nations Game if you prefer your egg shaped balls tossed in a more skillful and body armour free fashion. 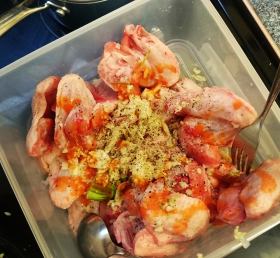 Start out at least 8 hours before dinner with a large container to mix the wings in- ideally something with a lid to protect the rest of the fridge from a fairly serious taint. Unless you like your cheese tasting of spicy garlicy raw meat. Put the chicken wings in and basically throw everything else in on top with the following prep:

Give it all a good mix, seal your container (if you can), stick it in the fridge and go off and do something for most of your day, or even all of your day until tomorrow whilst periodically giving it all a little shake.

Before you get to game time, heat your oven to 180C, take the lime halves out then dump out the wings and mairnade onto a hefty baking tray or 2 to cook for about 45 mins. Don’t be tempted to cram too many on to one tray- give them some space or you will get more of a poached result than crispy wings. You want to baste every fifteen mins to keep the flavour in. These also go perfectly on the BBQ, keep some marinade back to baste them with.

Serve with a green salad and pittas or a pile of chips or a chile con carne or ice cream or any other good stuff that you like to eat with your friends or on your own while you shout at your sports team of choice on the television. They can’t hear you, you know.

Variations- if you don’t have or want to use the above ingredients just try to hit the basic groups of sweet, citrus, sour and hot. And lots of garlic. For the love of all that is holy don’t skip the garlic.