Hello, and welcome to The Purple Dog in central Colchester. It’s a pub and it has history and beams and a beer garden and stuff. I’ve spent many a rowdy evening and one too many boozy afternoons there in my time due to it’s comfy ambience, indie friendly sway on musical matters and pleasing range of food and drink on offer. The Mr and I finished off our first date there in fact, but it was convenience that chose The Purple Dog for lunch this Sunday just gone rather than any kind of romantic nostalgia, I promise you.

So to set the scene yes, it was a sunny Sunday, towards the end of the lunch shift, and sustenance was required before Mr Me began his perilous journey back to the wilds of Maldon. He ordered a jacket with curry no, wait chilli. Yes chilli thanks. Rather obviously, I had a fish finger sandwich.

I shall make a point of saying that I like this pub, and have never been disappointed by their edible offerings previously.

My fish finger sandwich came  in a pannini which was a wee bit over done, as were the mega crunchy fishy fingers inside. Standard frozen sort, nothing special there, smear of tartare sauce in the bottom. No salad, no discernible seasoning. Somewhat worrying as the chips on the above photographic evidence were purchased in addition to the £4.75 I paid for my sandwich. If there had been no chips then what, this sad and harshly textured example of joyless calories on a mostly empty plate? Credit where due though, nice plate.

On the whole, unacceptable Mr Purple (or is it just Dog?). I can’t even drag out more words on the subject. Over done bread and a bit of sauce. Passable chips. Not much change out of eight quid. This is why people are eating out less and less, especially in the mid level eateries like your local pub. A little presentation can end up costing so much in these circumstances, if I had never eaten at this pub before this lunch, I wouldn’t ever do so again.

Overall, four out of ten. A standard pub garnish of three curled lettuce leaves plus two slices of cucumber and half a tomato under a thin drizzle of dressing would have increased this substantially. Take away the near cremated state of the fish fingers and this might have made a seven.  I might just stick to boozing next time. 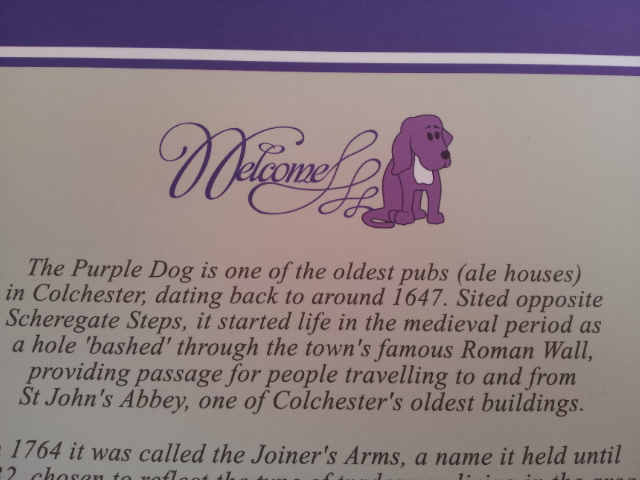