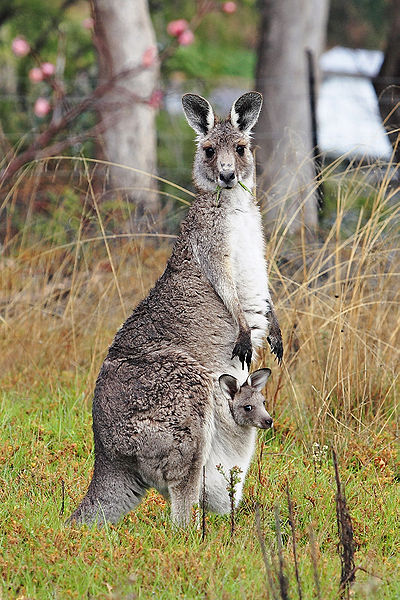 If you hadn’t already gathered, today we’re talking about Kangaroo meat. Indigenous Australians (we’re not to use the ‘A’ word any more) have unsurprisingly been chowing down on Skippy’s family for a very long time, but it isn’t something that graces many butcher’s counters that I have ever seen.
Kangaroo never really featured on the menus or shopping lists of the UK until the new variant CJD or ‘Mad Cow Disease’ traumas of the mid 90’s that made us all scared to order a steak. Many previously unheard of animals suddenly became fair fodder in that time, including ostrich and crocodile. This was a short lived fad, thanks mostly to changes in what farmers were allowed to feed cattle and how the slaughter houses were allowed to turn whole cow into consumer ready beef. BSE stopped haunting the headlines, and we all forgot about it.

But Kangaroo is coming back into fashion, particularly in the increasingly competitive market of poshed up burger vans vying for your custom at outdoor events and festivals everywhere.

F your I, kangaroo is a hearty, low fat meat found to be easy on the palate and high in zinc, B vitamins and a little compound called CLA which I’m told is anti carcinogenic and works against the progress of diabetes and heart disease. Fab! Kangaroo farming also has a much lower impact on the fragile Antipodean ecosystem than more traditional cattle and due to some kind of stomach freakiness Kangaroos produce negligible amounts of the greenhouse gas methane and so are better for the ozone layer than a beef herd. Double fab! So why has it never really taken off?

A brief poll of people I know delivered the resounding result of Naaaw, not a Kangaroo! They’re so cute! Personally, I’ve never been affected by this kind of sentimentality and have no qualms at all about munching Daisy, Thumper, Dolly, Donald or Bambi’s Mum. It’s all fair game- pun fully intended. If anything, I might be put off only by the fact that as far as I can tell a Kangaroo is basically a really big, jumping rat. Rat does put me off a little bit. Yet I recently found myself at one of the earlier mentioned pimp-my-burger outlets and yes, kind man at the grill, make mine a Kangaroo please, extra onions.

Now at this point I didn’t know that Kangaroo is good for you or low fat or any of that gubbins, I just researched that in the last couple of days. I ordered it quite simply because it was on the menu and unlike every other option, I had never tried it before.

Initial impressions: it looked good and it smelled great. Salad and sauce options were available and after some consideration I went with a nominal splash of ketchup. I then retired to a handy grass bank to consume.

It was good, but that’s not saying much as I’m pretty sure I never met a burger that I didn’t like. The taste is subtle and if I could compare it to anything the closest I can think is the flavour of dark turkey meat with the texture of a steak mince burger. Filling and satisfying, but that’s all she wrote. I wonder if it might be better suited to dishes where the meat is the substance rather than the star- I’ll bet it makes a good curry.

I certainly wasn’t disappointed, but I’m not desperate for any more. I wasn’t even struck enough to text my foodie brother to tell him about it, and I tell him about all kinds of much less interesting things. I heartily support the nutritional value and the positive farming aspects but I can’t see Kangaroo becoming big news outside of food festivals or trendy gastro pubs.

So the conclusion on Kangaroo: It’s no substitute for an Aberdeen Angus burger, but try it. You should try most things once.

Thanks everso to http://www.macromeats-gourmetgame.com.au for reference material.