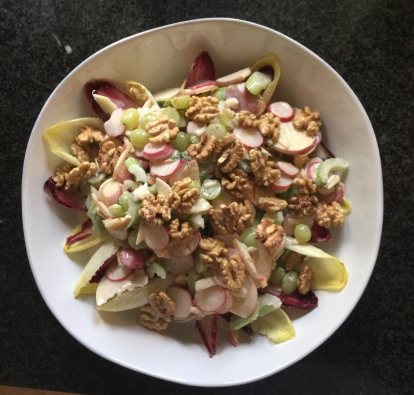 Your traditional Waldorf is pretty simple- apple, celery, grapes and walnuts covered in mayonnaise and served on shredded lettuce. It’s been that way since it was first made for a charity ball in 1896 at the Waldorf-Astoria in New York and that’s what it is. Put chicken in it? Not a Waldorf. Pecans? Not a Waldorf.  I get quite precious about people keeping a namesake for a dish then messing with the ingredients so I have to now emphasise that what I’m about to share is absolutely NOT a Waldorf salad. It is not a million miles away from it though, a twist on the classic one might say, even a tribute. Possibly a blatant plagiarisaton, but it’s a good one.

I was assigned salad duty at a homestead BBQ the other week and after some brief discussion with the Parentals we decided I would take a Waldorf, to much enthusiasm. I had a vague idea what it was, or at least I thought I did. When I googled it to check, it turns out I knew exactly what it was, those above six ingredients, and somehow it just seemed a bit………boring. I know right, who the hell am I to question a recipe that has been in fine standing for over a century? Well, I’m me, and I did. Adding radishes contributes to the overall crunchy texture of a Waldorf without any more sweetness, Similarly chicory isn’t a million miles away from lettuce but has a bit more structure to it and a pleasing bite, again offsetting the sweetness of the fruit. The dressing is still mayo based with plenty of cider vinegar and lemon juice plus fresh dill.

Yeah, I took a Waldorf and made it bitter. As I said, I’m just being me.

2 heads of chicory, ideally one white and one red
3 sweet eating apples, I like braeburns and red ones look better!
5 sticks of celery
240g pack of radishes
150g white grapes
100g walnut halves

Start with the dressing- mix the mayo with 1/4 cup of vinegar and the other ingredients then taste and add adjust to your preference with more vinegar if you like it punchy or balance that out with more honey. Adding mayo will give it thicker texture if it seems too runny. Chill for at least one hour.

Toast the walnut halves in a dry, non stick pan over a medium heat, moving them constantly until they jut start to become aromatic. Remove from heat and keep for later.

Wash the apples, celery, grapes and radishes. I like to prep any salad with different sized pieces, and for this I would halve the grapes lengthways, cut the celery on the bias, finely slice the radishes and cut the apple into discs from whole. Test your dressing again now by tasting with the salad items and if happy, mix it all together with about half of the walnuts.

Arrange whole chicory leaves on a serving platter then spoon the salad mix into the centre, top with the remaining walnuts and serve immediately. This is a pretty substantial salad alone but will go well with BBQ meats also. 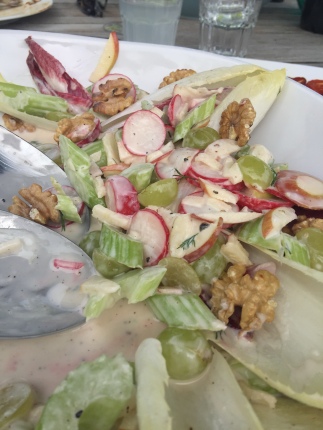 Variations: The dressing tastes a lot like salad cream so if you can’t be bothered, buy some from a shop and thin down with lemon juice and the dill. Don’t leave out the dill!!! You could swap the walnuts for pecans or hazlenuts and you can make this easily vegan with a Vegan Mayo and agave rather than honey but check the other ingredient quantities to balance the taste. I would avoid red or black grapes unless you really do want to bring the sweetness right down. Any greens will make a good base for this, Rocket if you like it really pokey or any crunchy lettuce like iceberg or cos.  I meant to add some yellow sultanas to this but forgot to instruct the Older Male Sibling to purchase some for me, so try those too!

3 thoughts on “The Boomdorf Salad”