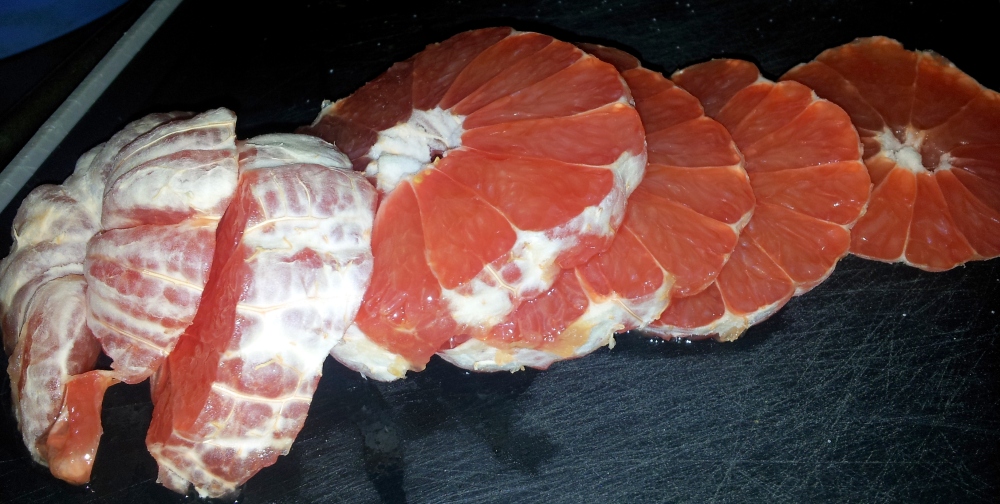 So, there’s been this red grapefruit sitting in the fridge for a while and it needed using. Obviously when faced with such a simple, nutritious and easily consumed food item I could only think of one thing. Cake.

But you don’t often put citrus fruit in a cake, juice maybe, zest to kingdom come but the actual flesh doesn’t appeal. Plus the acidity could bring curdling issues and there’s not actually that much fruit here, it would mess up the moisture levels too and put everything out of whack. That’s a silly idea. Maybe I’ll just stick it in the blender with some pineapple and make a smoothie.

Now wait just a seventies throw backing minute- pineapple! Pineapple upside down cake. Only the pineapple is in the tin and not in danger of imminently disintegrating into white mould and bad smells. So, grapefruit upside down cake. How hard can it be? After looking up several internet sites for guidance, I decided that most people who post on cookery websites either don’t know what the damn hell they are talking about or have ripped off a Martha Stewart classic. Like, word for word from the main Martha Stewart pages. Same full stops and spelling mistakes, all of it. So, bah, I’ll wing this one. And wing it I did. The results were beyond pleasing, not only because I pretty much made this up on my feet after a long Monday at work.

For the topping:
One medium grapefruit (I’ve used a ruby here but it would work with pink or yellow too)
100g unsalted butter
Up to half a cup of soft dark brown sugar

Preparation is key here children, start with plenty of space and heat the oven to 180 deg C. Get a, 8 inch round cake tin to the ready and one large, clean mixing bowl.  We’ll jump about a bit here so start by combining the sugar, butter and baking powder for the cake batter. Cream together until light, fluffy and uniformly mixed. I do this by hand with a big balloon whisk, but if you are happy with your biceps just as they are feel free to use a food mixer. Next peel a piece of stem ginger- I lurve ginger and use a piece about 1 inch long by half an inch across and thick. It has kick though, so if you’re not a fan maybe use slightly less. Pass this through a fine grater and mix the fine, juicy pulp into the sugar and butter mix- careful to discard the stringy mess that’s left behind. Now, just to confuse you, set this bowl aside.

Now peel your grapefruit, getting rid of as much pith as you can *insert taking the pith joke here*. Leaving it whole, slice into even rounds. Melt the butter then tip into the bottom of your cake tin, then scatter over the dark brown sugar until you have a layer of butter soaked sugar, as uniform as possible. This shouldn’t be more than a few good handfuls, and make sure you have removed any lumps. Now cover this with the grapefruit slices, try not to overlap any.

Back to the batter, add one egg and combine thoroughly with the sugar-butter mix. Repeat for the remaining eggs, then fold in the flour. Depending on how big your eggs were, the batter maybe very stiff at this point, and if it hurts your wrist to stir it with one hand then add a splash of milk to loosen it up. It shouldn’t pour like a pancake batter but you don’t need a cement mix either.

Spoon the batter over the grapefruit slices and get it in the oven for about 40 minutes or until golden brown on top and an inserted skewer comes out clean. Some of the topping butter may melt up when you put the batter on, skimming around the sides on the ‘top’ of the cake. Don’t worry too much, it will make it look messy but this will be the bottom of your cake, so who cares!!!!

Cool for a good twenty minutes, then get a large plate and cover the cake tin before flipping it over in a quick and single movement to turn it out. It is very, very important that you make some kind of declaration of your own brilliance here, such as ‘ta dah’ or ‘voila!’ or similar.

If you are fortunate, you now have a lovely, sticky, moist cake covered in caramel and grapefruit. Yum. Some say serve warm but I think it’s better the next day.

Variations: You can swap the root ginger for a tsp or so of ground if you must, but only if you really can’t get root ginger, it tastes so much better. Actually the root ginger is so fantastic in this batter you can forgo the topping altogether and just use this to make a lovely spicy ginger cake instead. You can swap the fruit slices as you please, for pineapple or pomelo or even finely sliced apples or pears if you feel like it. Apparently peaches work well too but could be very wet. Swap your ginger to match your fruit, although it would go with pineapple or pear. If in doubt, use some vanilla!