Gardening doesn’t really come easily to me, mostly because I don’t have a garden unless you count the sunless patch of communal grass riddled with fag ends and staffy wee at the front of my block of flats.

In fact any hands on cultivation of that land could well end up in literally green fingers. Ick. So I do what I can inside and have reared a lovely mini lemon tree from a mere pipling (it smells gorgeous but will never bear fruit) but that’s about it. Which is a shame as growing stuff is fun! Then I saw a post on here about about growing one’s own alfalfa sprouts in a jar in the kitchen. I always thought that sprouting was the complex domain of undeodorised vegans with massive special sprouting home thingies and frankly it looked like a bit of a bore. Imagine the surprise that one can grow bean (or legume or seed or whatever) sprouts with just a mutilated jar and some water, and about five minutes twice a day. I’ll have some of that.

Obligatory facts now- sprouts will give you all the goodness of whatever you are sprouting from in a slightly lesser form but are generally low in calories, high in fibre and usually very high in protein relative to their size. You are basically consuming the energy high stage of growth that turns a seed into a proper plant. Eating life, but it’s a plant so you don’t have to feel guilty about it. They are good for you, and if consumed fresh very tasty indeed. 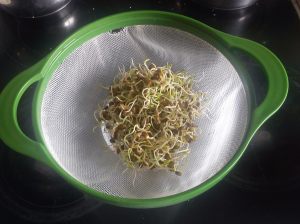 My first batch was to be puy lentils, as I had some in the kitchen at the time I decided I wanted to do this. Following my aforementioned inspirer’s instructions and a little googling, I put a big handful of lentils into the bottom of a large jar, covered them in water then left to soak overnight. In the morning, they were drained, rinsed and returned to the jar. I then stabbed some holes in the jar lid and left it on the side in the kitchen, out of any direct sunlight (not hard in my place). Then that evening, I rinsed them again. The next morning, I rinsed them again. That evening…….yeah, you got it. After 3 days tiny shoots could be seen to emerge, and they grew pretty rapidly from then on, getting to a nice harvesting size after a week. If you don’t want to eat them straight away they can go into a box in the fridge at any point, which will stop them from growing any more and they should keep fresh for another week. If you can wait that long. I couldn’t, and I ate mine this very lunchtime with a salad and I can say they were delicious. Crispy, refreshing and slightly earthy in taste, there was a vague hint of their lentil beginnings but nothing over powering. My only advice would be to avoid the unsprouted one or two in the mix, which were horribly bitter.

Incredibly easy and, I’m sad to say, tragically exciting to come home to after a hard day in the office when they are in the quick growing stage. It’s like magic. Healthy magic you can eat.

thanks to http://www.energiseforlife.com/sprouting_benefits.php for some background reading