When considering the cuisine of Scotland, the first two things to come to this mind are haggis and whiskey. We’ll get to the former later, and start out instead on a tale of some hours spent on a sunny Thursday, just off the B9008 in Banffshire.

I should make it clear early on, I’m not a Scotch drinker. Mainly because I don’t like it, and also because a tiny little snob somewhere deep inside me still considers it as something of a drunk’s drink. I know this is unfair, I know that whiskey production is a complex process and that it has a staggering amount of variations and nuances and all that. I get it. Doesn’t mean I have to like it. Nor does it mean that I’m not interested in how it comes to be, so on a recent trip to Scotland with some friends (by which I mean Whiskey-philes) I was happy to go along with a proposed stop at The Glenlivet.

This is one of several distilleries on The Malt Whiskey trail in Scotland, which you can read more about by clicking here. We chose this one to stop at rather than the others for some good reason I’m sure.

The visitor centre is a fine set up indeed with a fantastic and reasonably priced little coffee shop with great homemade cakes and ice creams. Yes, you can get a whiskey ice cream.  A free tour of the main distillery goes every 20 minutes during the peak season and is well worth 45 minutes or so of your time. 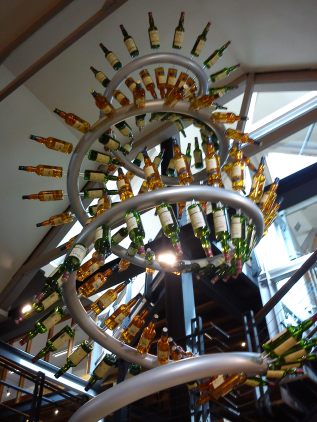 Sadly there is a strict no photography rule once past the main centre doors into the actual distillery. This sense of formality extends throughout as one is schooled on the classification of barley and malt and spring water, and the various stages each goes through in order to become the acclaimed single malt product. As a tourist, one is guided past several huge wooden vats full of developmental stages of whiskey then later a steam punk dream of massive pressurised copper vats, all permeated with a not quite unpleasant malty aroma that seemed to me a mix of ale and horlicks. My naivety lead me to be a little disappointed in the main distillery however, which is now like most production lines more or less completely automated. I had half expected lots of red faced chaps in overalls sweeping barley husks off the floor or stirring great alcoholic vats of bubbling amber. Oh well.
Then it was on to a quick walk outside combined with a history lesson on the story of how The Glenlivet came up from a mass of illegal outlets back in the day when a certain scotch loving king decided to relax some laws in order to make it easier to distil without fear of being clapped in irons. Here came naive disappointment number two when the tale turned to the previously family owned business being recently sold to French drinks giants Pernod Ricard. Sigh.
Penultimate stop is in one of the massive barns where the water of life is barrelled up and quite simply left, maturing in sherry or bourbon tempered casks for 16, 18, 25 or more years. Through this mellowing process fumes evaporate out of the barrels over time- known sweetly as ‘the angel’s share’. I’m assured by everyone else on the tour that this is a marvellous smell. Did I mention that I really don’t like whiskey? Yeah. Ick. Onwards.
And the tour ends in the tasting room, where one is invited to a free dram of one of three of the Glenlivet varieties after being told exactly how to drink it (small sip, then add spring water to release flavours, sip again).  I, like most, opted for the 18 year dram and managed a couple of sips before politely passing it on to one of my more enthusiastic comrades.

It was interesting but possibly a little wasted on one such as myself who only once in a while samples a Jameson’s and makes a spectacularly squinty face when attempting to consume any proper scotch. Still, I recommend it if you’re passing that way with time to kill, and the rest of my group doubly recommend it to actual whiskey fans. There are some nice little walks around there once you are done with the lessons and the coffee shop and why not spend the money you didn’t have to pay for the tour in the inevitable visitors shop- where you might be surprised at how far the whiskey boat can be pushed.

One thought on “Foodie Day Trip- The Glenlivet Distillery”