What: Craft beers and higher end pub grub, big TV
Where: 2nd Ave on the corner of 5th St, East Village
How much: Mid range, roughly $8 a pint, relatively a lot more for bottled brews. Food menu $10-$20 a plate
Overall: 10/10 for beer drinking,

We came across Cooper’s (named for the local college, not the barrel makers) on our first night in New York- not quite the first bar we walked past having left our Air BnB digs but the first one boasting a $1 oyster happy hour and a long list of craft beers on tap. Sold. 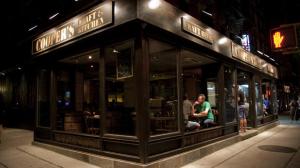 So it was Thursday night, some time after 8, Cooper’s is underlit to fully endorse its bare brick and high wooden stool trendiness. It’s busy and a little noisy, there are lots of suits in the back and an iconic line of solo drinkers at the bar keeping an eye on the football. The bar man has a partially shaved head and very tight trousers. You know the kind of place. Ok so it wasn’t a massive gamble- the older male sibling commented that the bar, as well as much of the local area, reminded him a lot of what many establishments are trying to achieve in Shoreditch. I might suggest it was the older, slightly smoother American cousin that nicks your girlfriends to Three Wise Monkeys back in sunny Essex. So yes, we were guilty of being Brits abroad and going for something that was a lot like the places we choose to go at home only it all seems better because you’re on holiday. Not a novel venue,  but certainly an exotic drinking list with next to nothing on the chalk board that I recognised. A half memory of trying and liking a sour ale at the Victoria Inn once upon a time lead me to take a gamble and discover Southern Tier and their deliciously winky Local Sour beer- local in name and nature as the brewery is based in West New York. I’m going to take a moment to sell you this beer if you ever see it- looks like a dark blonde, drinks like a hoppy, sharp scrumpy, if there were such a thing. Different, yes, but in a really good way. Absolutely beautiful and I am a one woman Twitter campaign to get them to ship across the pond. My second pint choice of Funky Pumpkin from the Boulevard brewery was marginally less successful. Drinkable? Just, but distinctly odd with a medicinal aftertaste of cough candy. A distince Hmm on untapped for that one, but I’m inspired to try more pumpkin brews as it is the season. The OMS found two pints that appealed well to his old-man-ale preferences too and an all day session could no doubt have opened up a couple of tempting espresso brews, stouts and ciders also available.
We didn’t eat, having already committed ourselves for some time to eat at a BBQ joint a few doors away. I would certainly give them a go for a dinner based on the plates we saw being served during our drinking- think high piled burgers with innovative fillings and shiny buns, stacks of fries, huge green salads and unctuous steaming dishes of mac n cheese. Mmm. We did however skip back there for dessert in the form of two wonderfully formed nightcaps, over ice, which some of us regretted the next morning.

If there was any downpoint to our visit, it was that time and circumstance had us there for  pre and post dinner drinks, rather than a long day of ale sampling punctuated by plates of whatever and chips and lazy conversation. It’s a good place to go.