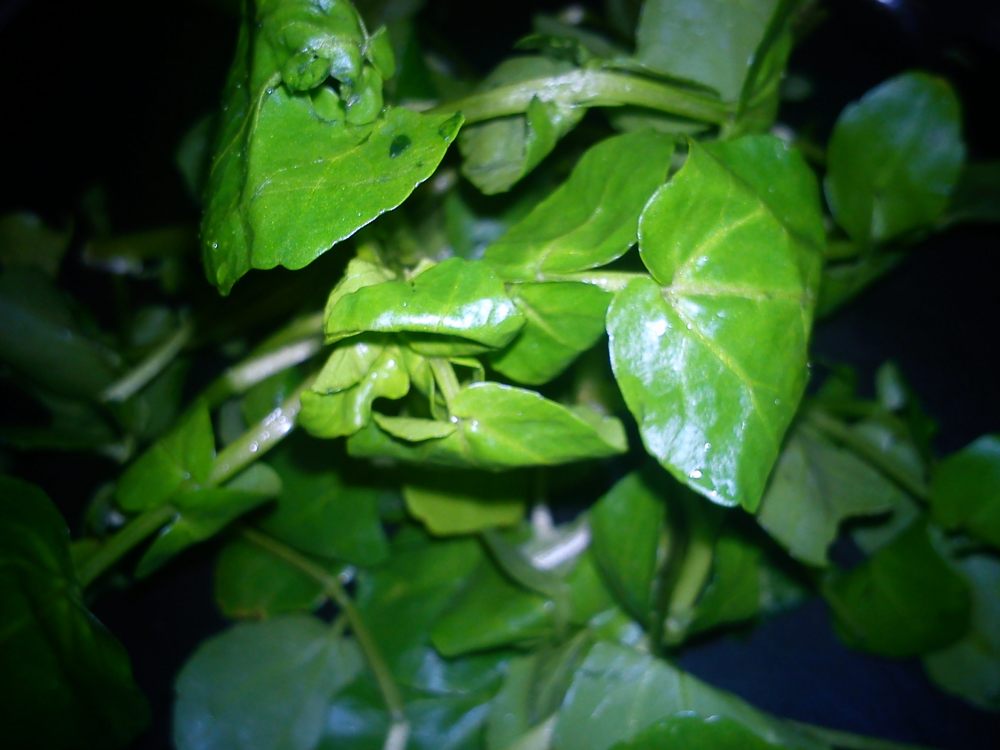 Unless you live in the southern hemisphere or in some kind of fantastic underground super villain lair, you may have noticed that the winter is almost upon us. It’s freezing outside, and with a million cold bugs attempting to force their germy feet in the door it’s time to review your nutrition if you want to ward off those seasonal sniffles.
Enter the perennial flowering angiosperm of the cabbage family that is Watercress. It’s leafy, it’s peppery, it’s a lovely colour and as well as packing a fairly serious flavour punch, it is massively good for you. So good for you infact that ancient Greek Hippocrates, oft touted as the father of modern medicine, built his first hospital on a river bank to ensure he always had a plentiful supply of the stuff.
Weight for weight, watercress will give you more vitamin c than oranges and more calcium than milk, plus 15 other assorted essential vitamins and minerals that your humble body needs to make it through these short, dark days. Watercress is so nutrient dense that many a pouting celeb has been known to endorse a diet made of a week of very little but watercress and vegetable stock. You will lose weight from this diet, unsurprisingly because it’s a green leaf so it is very low calorie. I wouldn’t recommend living on nothing but this shiny green wonder plant but you should definitely be getting some into your diet. Queen Victoria was a big fan apparently, and she lived to a ripe old age.

A bona fide Super Food- watercress is touted by clever science types as a stimulant, antioxidant  diuretic, expectorant, cancer fighting digestive aid. Did I mention that it’s also very tasty? It’s characteristic hot, peppery taste comes from the mustard oils released when the leaves are crushed by chewing and compliments a number of other foodstuffs. In a shameless plug, you might want to try it in some savoury muffins with Stilton or cheddar cheese or add a handful to a give some kick to a sandwich. Add it to soups or stews the same way you would fresh herbs- in plentiful amounts right at the end of cooking. You’ll lose the flavour and some of the nutrients with long cooking periods (more evidence against the alleged benefits of the Watercress Soup Diet) so don’t over do it, infact I like to chop watercress raw into a bowl then pour in the cooked soup or whatever on the top- the heat will cook it through without losing the crunchy texture.
My favourite watercress recipe is easy to make and perfect to serve at this time of year. Peel and cut some white potatoes and put into a pan with three or four roughly chopped garlic cloves. Add a pinch of salt and cover with water, boil until the potatoes are cooked enough to mash. Drain, season heavily with sea salt and black pepper then mash with a big knob of butter and a slug of milk. When it’s smooth and ready to go, stir in several handfuls of chopped watercress then serve alongside some sausages or roast chicken. Deeee-lish.

And if you’re in the UK, watercress is grown in abundance here since being introduced a few hundred years ago by the Germans via France so get your patriotic bit on and support some home grown edibles as well as your immune system. Enjoy. Hurrah. Right that’s enough I’m off.