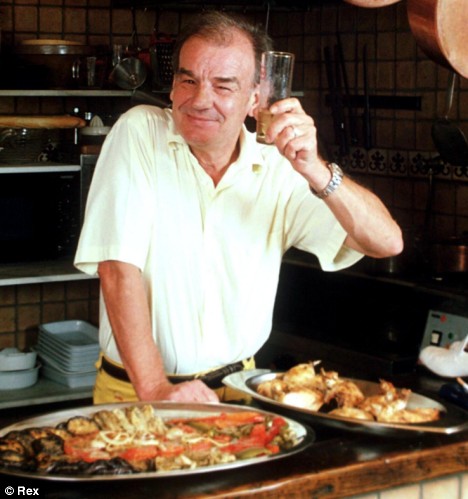 Keith Floyd came to be 1943 and worked in the army for some time before embarking on his culinary career as either a bar man or a veg peeler, depending on your information source. He had something of a chequered history in the catering trade, opening then bankrupting a group of restaurants in Bristol, then repeating the process later in southern France. A quick scour of wikihistoy confirms the slightly cracked, rakish English sterotype he showed us on telly was maybe not as affected as it might appear- a hard drinking, chain smoking boozer with a string of ex wives and a charmingly toffish speaking voice that lent itself so well to mildly abusing a camera man. James Bond’s cooking cousin perhaps, Mr Floyd was one of the earlier TV chefs with a staggering number of books under his belt as well as a run of beeb shows from the mid eighties until 2001. A staggering number of books it’s not easy to get hold of nowadays it seems as most Victoria Inn cookers were found trawling library order services and ebay in order to get a good selection to chose from.

In general, we loved all the Floyd food we came up with and yes some of it was pretty heavy on the hard stuff as expected. But all of it was good and hearty and nicely traditional, despite being from a number of different cuisines. Some of it ever so slightly retro to my mind, but in a good way. Although traditional doesn’t always mean simple and I certainly skipped over a few options in favour of saving time and shopping hours. The only irks expressed were that some quantities in the recipes seemed a little out of whack (if they were present at all) to the point of questioning the sobriety of the writer at the time of composition. So here we go, Cheers Keith!

In summary, we like Floyd and I think I will keep an eye out for any more of his books on my travels!