Anyone remember that old TV advert for trying new things that you previously thought were rubbish that you might actually like and one of the things they suggested was Belgium, depicted by a lone cow in a flat field giving a long and forlorn moo? No?
Well anyway I’ve been to Belgium a couple of times, visiting Brugge some years ago and Ypres just a week ago. There’s more than you think going on in Belgium, especially if you like good food and beer (and if you don’t you may well be in the wrong place). It is still pretty flat though, with quite a few cows.

The main cause of my second visit to Belgium was a late addition to my father’s 60th birthday celebrations to visit The Menin Gate and take a WWI Battlefield Tour. I wont go into this too much, but I would thoroughly recommend such trips to anyone with an interest in history, the military or frankly anyone who thinks that modern life is rubbish because you may need some of the perspective on this that the various memorials and museums in the Western Front areas of Belgium provide. And what better time to visit than on the brink of the 100 year memorial of the start of WWI, coming your way in just a few months in 2014? No, it’s not a knees up kind of celebration thing but when you are finished paying respects and improving your modern history knowledge there’s plenty of beer and good times to be had also.

So, Ypres or Ieper depending on your mother tongue; a little over an hour’s drive from either Brussels or Lille; a compact, well kept and gothic looking town that is in its entirety less than 95 years old due to being completely annihilated in the first world war. It was reconstructed faithfully when hostilities ceased and has an ordered and serious feel to it. The main market square is lined with many a chocolatier and eatery and drinkery and bakery. Brasseries, bakers and pubs, oh my! If I was considerably richer in time and money I could happily spend a lot of time eating in Ypres.

You will find the usual continental suspects if you want to eat at home- cheese shops and high end delis with some heart stopping patés on offer and the kind of airy, theatrical bakery that we would call artisan at home is standard issue. Try the Paris Bakery on the corner of the main square opposite the cloth hall for fruit bread loaves bigger than your head. As expected several chocolatiers are to be found in town and one rather majestic waffle shop which I very sadly only managed to inhale calories from on the way past. Stupid two day trip.

I’m not going to list all the shops, that would get dull quickly, I will just say that there is a plenty and said plenty is high quality too- though you may expect that quality as it’s not a comparatively cheap place to do anything. Not so fun Belgium fact- it has one of the highest tax rates going in the EU. Travelling Brits should expect to cough up a pretty penny for all consumables, but you can get your beer by the litre and Belgium is home to 800+ domestic brews so save some euros for the barman. It is also worth noting that a double mokka is nothing like the mocha you are used to from Pret or Costa or your preferred high st coffee agent. 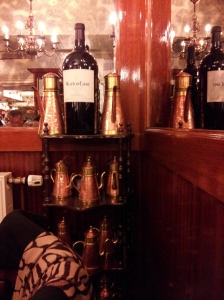 From our flying visit, I can recommend two brasseries in Ypres if you find yourself there: De Founderie and Old Tom’s. I can’t really do justice to De Founderie without pictures of their fantastic and beautifully presented food, you need to go there to believe it but the best summary I can give is taken directly from Richard Holmes’ summary of all eating in Ypres as “a good dinner- French quality and German portions.”* I was thrilled by the presentation, comforted by the non invasive but friendly service and yummed out by some fabulous fish, so much so that I couldn’t manage a dessert. I know. Me turning down afters. So at 50-60 euros a head if you’re full on with wine (and why wouldn’t you be?) give De Founderie a go. I particularly recommend the ray special which was an enormous skate wing, perfectly cooked and simply served with some spuds and plenty of butter. Dad said good things about the steak too, and he tends to know about these things.

Old Tom’s is in the main market square adjacent to the Cloth Hall (which you really can’t miss) in a bank of restaurants and came recommended to us by Benoit who’s lodgings we were renting for our stay. You should find it fairly easily and it’s a short walk from the Menin Gate or the city walls. It’s very traditional and a little bit 70’s inside, but in a charming way. The staff are spectacularly friendly and tirelessly cheerful even when one bunch of bloody English tourists are rather obviously keeping them at work later than they would usually have to hang around. They have an impressive fish menu and boast eel as their house speciality though none of us ventured to try this as it would likely have meant sitting at a table separate from father who is not a fan to say the least. Starters sampled were some very fresh oysters for the boys and shrimp croquettes for the girls. The oysters were served plain but very fresh with only a lemon wedge for dressing. All were consumed without complaint. The croquettes were fantastic- crunchy on the outside with a hot, smooth filling rich with fresh prawns and plenty of pepper. Don’t be fooled by memories of grim oven cooked school dinner croquettes, these are really worth a go.

It  would have been rude to be in Belgium and not have a traditional mussels n frites supper, so we all went for variations on this theme. There were several sorts on offer- all huge pots of freshly cooked shell on mussels poached in cream or white wine or a curious sounding mix of white Belgian beer and curry. My brother had the curry mussels (on top of raw oysters, the man has guts of steel) and reported that they were quite wonderful. I went for the ‘Mussels Old Tom’ in which I could identify butter, cream, white wine, garlic and lots of celery tops along with some bonus cockles. Absolutely delicious, perfectly cooked and served with a big dish of hot frites with accompanying mayonnaise and ‘mussels sauce’ which seemed to be some kind of dijionaisse sauce with some cooked chopped mussels lurking within. Who cares what was in it, it was great on chips. Wash it all down with a good sancerre or a range of reds or beers on offer and you are in for a rather massive treat. Well satisfied and well stuffed and yes, there was no dessert for me this night either. Ooof. I did try a small corner of the old man’s waffles though which were beautifully light and tasty and served with gloriously twee lashings of whipped cream and fresh fruit.
Old Tom’s was a warm and satisfying experience I can’t find even the merest complaint about. A slightly more budget friendly option than De Founderie at 30-40 euros a head including excessive amounts of wine and a couple of desserts, with a homely atmosphere and such friendly staff please please please do give them a try if you are in town, maybe after your visit to hear the Last Post, still sounded at the Menin Gate every night at 8pm which is as much of a must do as a mussels dinner.

Should I go back to Ypres, which I feel I probably will, I will save space for waffles and look forwards to more chocolates and a fuller induction in beer at one of the comfy looking bars scattered around the place. It’s not a party town by any means, Ypres is understated, polite and casually well turned out though and a real treasure trove for the discerning consumer of all things delectable.

*From the foreword to The Western Front, available from BBC books.